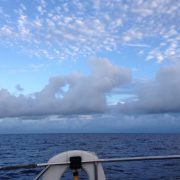 Pacific Wave sailing through the Caribbean island hopping from St Lucia to Union Island and then on to Grenada on our final leg of our journey south. Encountering a pod of Dolphins followed by Sperm Whales right up alongside the yacht just off Bequia, read our sailing adventures to find out more….

We sliped away from the mooring buoy located in-between the Pitons in the UNESCO World Heritage site. What a stunning view as we sailed south, looking back at the Pitons towering up into the mornings deep blue sky, set against the dark shimmering Caribbean Sea. 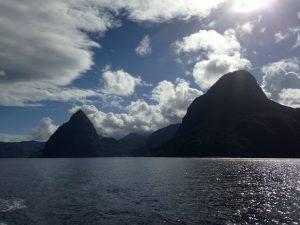 This was going to be a long sail as we headed for Union Island in the Grenadines. What delights will the voyage have in store for us on this route l wonder?

It wasn’t long before we were rewarded. Approaching the North tip of St Vincent a pod of leaping Dolphins sped towards us with great delight. These Dolphins were so happy to play around Pacific Wave, leaping in our bow and stern wake and circling the yacht; it’s all a game to them. After a while the Dolphins decided that fishing is more important than play, so they headed off out to sea to catch their lunch. As we sailed past St Vincent we were making really good time, with fresh winds. By the time we reached Bequia it was still early afternoon and so we decided to continue further for the day. We were really eating up the sea today as we steamed south! 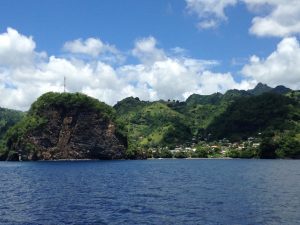 Off the south coast of Bequia the winds died and the seas flattened, so it was engine on and motor sailing. In-between Bequia and Canouan all of a sudden right alongside Pacific Wave two small Sperm Whales surfaced. They were so close to the yacht that you could have reached out your arm and touched them. They stayed on the surface and were visible for a long time as we continued our journey south. It was incredible to witness this spectacle so close to Pacific Wave. 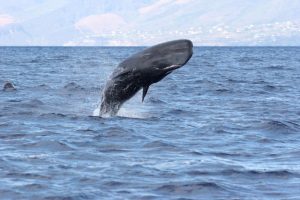 Sperm Whales off Pacific Wave between Bequia and Canouan

We continued on our journey and just arrived at Union Island in time for another stunning Caribbean sunset.

The following day we got up with the birds and departed the anchorage at the break of dawn. The skies were stunning with lots of unusual cloud formations. It was time for some fishing so out comes the rod and we started trolling for our supper. Within no time we got a bite, and it was a good size fish on the hook. After a good struggle we landed a 15lb Dorado, such a beauty! 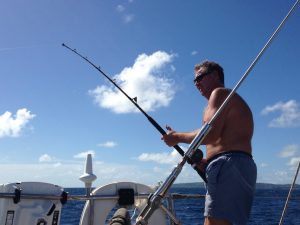 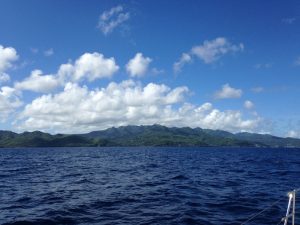 Sailing down the Caribbean island of Grenada onboard Pacific Wave

What a great sail, arriving in the anchorage off Grand Anse Beach to relax and watch the beautiful Grenadian sunset, dining like kings on delicious freshly caught Mahi Mahi, otherwise known as Dorado. 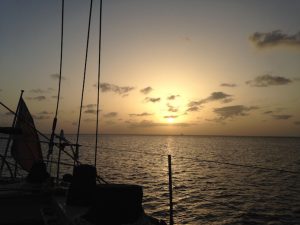 Another successful transit accomplished by Pacific Wave to take her safely south for the hurricane season.

https://www.sy-pacificwave.com/wp-content/uploads/2016/10/Sailing-in-the-Grenadines-on-Pacific-Wave.jpg 750 1000 Lynn Griffiths https://www.sy-pacificwave.com/wp-content/uploads/2015/06/logo-pw.jpg Lynn Griffiths2016-10-25 19:39:292016-11-01 04:52:19Pacific Wave sailing south for hurricane season St Lucia to Grenada spotting Sperm Whales alongside the yacht
Scroll to top
PACIFIC WAVE HAS BEEN SOLD! We are excited but sad to inform our valued guests, friends, suppliers, and all who have supported us over the last 12 years, that Pacific Wave is now under new ownership. Sincere thanks from us to all of you, and fair winds to the most beautiful yacht, our home and friend, the mighty Pacific Wave. Please contact us through the usual contact details for full information, or to finally know the secret recipe of our special PW Grog!